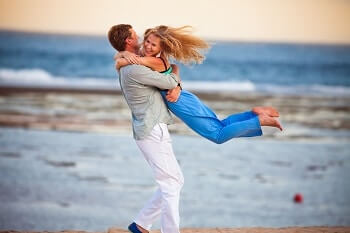 So much ink, digital and otherwise, has been spilled talking about female body language signs of attraction. And to be honest, most of it is a huge waste of time. It’s not about deciphering some esoteric language of insanely specific physical cues. In fact, the body language of women, much like men’s, is a lot more simple and straightforward than you probably realize. Here’s your quick guide on how to read body language of women to figure out if she’s interested.

Is she making eye contact with you? I don’t mean is she staring at you; I mean is she maintaining a regular level of eye contact? At the very least this means that you have a chance to create and foster attraction. In a best-case scenario it means you’ve already done so. On the other hand, if she’s looking everywhere but at you, that’s a pretty clear sign that she’s not interested and you either need to get her interested fast or move on to greener pastures. This is one of the easiest signs of attraction to spot, so be sure to pay attention to it.

The Angle of Her Body

Here’s one a lot of guys don’t know about that will tell you way more about how attracted she is than anything: The angle of her body can tell you a lot. In fact, we spend a lot of time in our boot camps here at The Art of Charm talking about the angle of bodies with regard to decoding body language. The short version is, the more she’s turned toward you, the more she’s likely interested in talking to you. On the other hand, the more she’s angled away from you, the less she’s interested in continuing the interaction.

Another one that should be obvious, but often isn’t, is the proximity of her body to yours. The closer she’s standing to you, the more interested she is — that’s pretty much a truism. She might be at arms’ length from you and still be interested if that’s situationally appropriate. If she’s basically standing on top of you in a room where she doesn’t have to be, that’s a pretty clear sign of interest. If her overall movement is away from you, that’s another sign of disinterest.

This one can be very subtle and complex. A lot of it has to do with the actual physical environment and the situation the two of you are in. So don’t agonize over this. Instead, use it as a way to check in comparison to other thing she’s doing.

Is she touching you? I don’t mean is she groping you in the middle of the bar. I just mean, is she touching you? At all. That could be a lot of “accidentally” brushing up against you or slapping you on the arm playfully. But don’t discount that stuff. Women are often very aware of their actions, much more so than men. So if she’s touching you in any way at all, you can read that as a sign that she’s — at the very least — not actively disinterested in you.

The next time you are out on a date, remember to check to see what her signs of attraction are telling you.